With the help of one of our sponsors, who used to make money by sewing themselves, we have so far been able to organize the first sewing course, which cost around EUR1300.

With this money, the sisters were able to repair six old sewing machines, buy goods, and pay for an experienced person teaching sewing with a machine. In total, the course lasted seven months and was attended by a total of about 40 women, some of whom attended the whole course and some only a certain part of the course where they learned how to make the type of clothing they wanted to specialize in.

As the sisters wanted to make the most of the donated funds, they thought of how, many women, who could not afford to buy their own sewing machine and the necessary supplies, could also earn some money. They made available the space with sewing machines used in the course, while collecting in shops and textile factories samples of goods sent by the factories to the dealers, e.g. 0.3-0.5 m2 large cloths. These cloths can seamstresses, especially when they are suitably combined, use to make smaller pieces of clothing, e.g. panties on elastic for young children.

This is a relatively straightforward sewing job that can also be done by those who were not particularly adept at the course. The panties are then sold for half the normal price, namely for 50 rupees, that is approx. EUR 0.65, which they can afford because they got the goods for free.
Considering that they often have to get by with less than EUR 100 a month, by making such simple clothes they can already make some adjustments to their family budget.

One of our sponsors contributed the money for this sewing-course 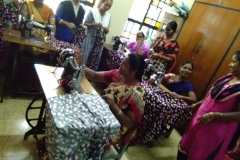 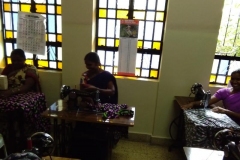