We started this project when one of our sponsors suggested that we support starting their own craft by giving small credits. Without initial capital, the qualification obtained is not sufficient.
It is often impossible to raise enough start-up capital for those who turn to sisters. They earn too little to save money. The bank will not give them loans because they do not have any possession to guarantee the bank to get their money back. All they can do is turn to private money lenders. Their interest rates are around 10% per month.

That is why people only borrow money from them when it is absolutely necessary. After that, many of them can only pay off the interest, or not even those. In the latter case, the debt is getting bigger and bigger, and the borrower will less likely be able to repay his debt in full.
Although giving people the opportunity to start their own crafts was the reason why we started this project, it soon turned out that the purpose of the loan could well be extended to prevent people from getting in debt because of the interests for a lifetime. Thus, in agreement with the sponsors, we decided that it was possible to take credit for other purposes.
Our plan was to give people a loan without any interest, which they would repay with installments to the best of their ability, typically within 4 to 24 months. For the sisters, opening a small moneylender was a novelty, as they had not dealt with anything similar before.
They organized the loan so that each applicant must submit a written request explaining what the money will be spent on. All payback is documented. If possible, the applicant should also provide confirmation that he/she really used the money for the purpose stated in the application. Money is given as soon as people return it to the next applicant, and there is already a long list of applicants. The sisters know quite a lot of people and give credit only to those they believe have a serious purpose in repaying it.

Wed. Saleena is very pleased with the project and notes that it helps people a lot. So far, they have not yet had a case of refusing any credit repayment. With the same money, they can help people again. Unfortunately, the money in the fund is currently not nearly enough for all those interested in these loans. Thus, e.g. for one of the slum wives who meet at St. Vincent’s House, who is currently in a particularly difficult financial situation, the loan would made it possible to buy a sewing machine and goods, and five wives would like to buy a cart together to sell their cookery products in front of the businesses. However, there is not enough money for both applications at present.
On behalf of all these people and sr. Saleen we address anyone who can contribute to this end. Even a small amount counts because it is worth far more in India than it is in Austria, and because of this project it is always coming back into circulation.

Two examples of loan applications and a list of repayments for one of the borrowers. 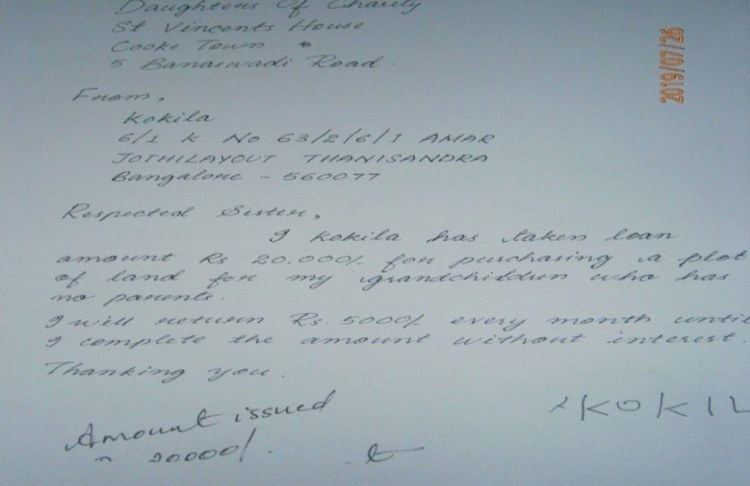