In Malawi, our project partner are sisters from the order Medical Missionaries of Mary (MMM), better known in Ireland, where they originated, as well as in England and the United States. They operate in many countries in Africa as well as in South America.

In Malawi, the MMM sisters have two houses, one in the capital Lilongwe and one 30 km away in the village of Kasina. The house in Lilongwe also includes a health center in the nearby village of Mtsiliza.

The work of the order is focused mainly on the field of medicine and many of the sisters are doctors or nurses. Its purpose is to provide medical assistance in countries where the level of health care is low, especially to those people who would otherwise not be able to afford health services.

The entire health system in the country is in extremely poor condition. In addition, there are many AIDS and cancer patients in Malawi. Many rural patients do not have money for transport to hospitals. However, if they can finance it, hospitals often send them home without treatment because of lack of medicines, staff and space. For example, there is just one specialist in kidney disease in the country.

The money, that state administration receives from international organizations to support the development of the health care system, often ends up in the pockets of various politicians instead of hospitals.

For these reasons, an alternative possibility, that people can visit the Medical Missionaries of Mary Medical Center, where each patient is given appropriate treatment and where they can also get medication and therapy at up to ten times lower cost as in state hospitals – is priceless for them.

Within this health center there is also a Palliative Care Service, which visits patients with cancer, AIDS and other diseases in the surrounding area, up to 25 km away in villages and delivers food and medicines to them.

Malawi has also a problem of high poverty and related malnutrition. Few people manage to get a job. The average per capita income is just over $ 250 per year. Prices in shops are as high as in our country, for example: 1 l of milk costs more than 1 euro and 1 kg of bread just as much. The only way people can survive, is by growing food for themselves. But patients and the elderly, as well as many orphaned children in Malawi due to the catastrophic state of the health system, are not able to do that.

As a result, the sisters deliver food to approximately 170 people each week, most often a mixture of corn and soybean meal, which should be sufficient for 1 meal a day. They can also bring them clothes as needed, as nights in Africa can be very cold, which can be fatal for patients living in houses without glazed windows. Sisters are also assisted by a group of volunteers from their parish of St. Kizito, run by Mrs. Eileen. With the help of this group, whose members visit people in the villages and assist them with counseling, the community of sisters is trying to enable the socially disadvantaged to stand on their own two feet. Many of them would be capable of doing so and have the necessary knowledge or land, but lack the initial capital to start an activity. If they are enabled to get a micro-credit, many of them can earn regular monthly earnings to take care of their family. 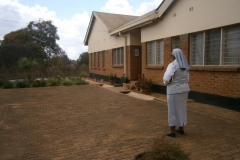